With the release of VMware NSX-T 3.0, there is now support for Federation in NSX-T

- Each location has Local NSX-T Manager with vcenters, clusters and hosts.
- NSX T Global Manager provides single pane of glass for management of NSX-T managers placed in the individual locations.

- Ability to have non stretched Tier 1 Gateways in individual locations.
Here span of the segment could be limited to one location.

- Span of Tier 1 Gateway has to be less than or equal to the span of Tier 0 Gateway.

- Stretched Tier 1 Gateway can run services like edge firewall or NAT if required.

- NSX T Edge Clusters at each site are configured with RTEP IPs.
RTEPs are required to handle cross site traffic.
RTEPs are required only if the Edge cluster is used to configure a gateway that spans more than one location
RTEPs across sites in your setup should have IP connectivity to each other.
There is Geneve tunnel established between RTEPs.

Once, Global Manager is deployed then you are able to add locations
While adding a location, you need to specify
- Location Name
- FQDN
- Username
- Password
- SHA 256 thumbprint which is retrieved from Local Manager GUI.


Above you see that two locations Bangalore and Delhi have been added to the Global Manager.

Sharing the screenshots for these steps from Bangalore Location.
Please note that same steps are to be followed in the other location Delhi as part of fabric preparation.

Above shows edge cluster in Bangalore

Before proceeding to configurations on Global Manager, ensure that same steps are followed for preparing fabric in Delhi location.
RTEPs are to be created on the edge cluster in Delhi too.
There is RTEP to RTEP communication for cross site traffic.

With the fabric set up properly in both the locations - Bangalore and Delhi, now configuration can be applied on Global Manager.

Above segments are created on Global Manager.

These segments are to be used while creating layer 3 interfaces on the stretched Tier 0 Gateway from Global Manager.

Create Layer 3 interfaces on the stretched Tier 0 Gateway as shown above.

And similar logic is used to create rest of the layer 3 interfaces on Tier 0 Gateway.

At this stage, we can test reach-ability between physical routers and Tier 0 Gateway interfaces. 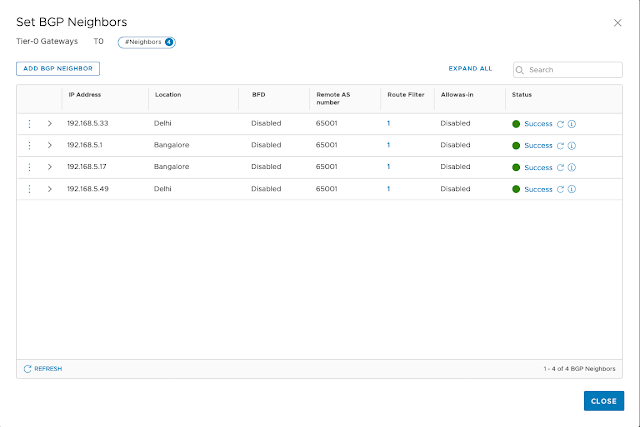 In the BGP configs, BGP AS number is configured and BGP neighbors are specified.

Enable route redistribution for connected Tier 0/Tier 1 subnets on stretched Tier 0  Gateway for both the locations - Bangalore and Delhi.

Physical routers in Delhi are prepending AS while receiving routes from edges in Delhi.

From the Global Manager, create a stretched Tier 1 Gateway.

Now attach workloads to this segment and test East-West Connectivity and North-South connectivity.


From the above, we verify the MAC addresses associated with the VMs and that there is reach-ability between the VMs in different locations.


Above we see that RTEP to RTEP tunnel is established properly.